What the heck is UVC anyway?

The other day I saw someone “sterilizing” a surface at a manufacturing plant with a lamp. When I asked what it was I was told it was a UVC lamp. I have been hearing about UVC being used to kill bacteria in air conditioning systems, but had no idea how this worked. I knew UV stands for ultraviolet but the C?

What is Ultraviolet C? The entire UV spectrum can kill or inactivate many microorganism species, preventing them from replicating. UVC energy at 253.7 nanometers provides the most germicidal effect. The application of UVC energy to inactivate microorganisms is also known as Germicidal Irradiation or UVGI.

UVC exposure inactivates microbial organisms such as bacteria and virusesby altering the structure and the molecular bonds of their DNA(Deoxyribonucleic acid). DNA is a “blue print” these organisms use to develop, function and reproduce. By destroying the organism’s ability to reproduce, it becomes harmless since it cannot colonize. After UVC exposure, the organism dies off leaving no offspring, and the population of the microorganism diminishes rapidly.

Ultraviolet germicidal lamps provide a much more powerful and concentrated effect of ultraviolet energy than can be found naturally. Germicidal UV provides a highly effective method of destroying microorganisms.

But what about Ozone? UVV or Vacuum UV light refers to another wavelength in the ultraviolet spectrum. Some UVC devices also produce light in this wavelength. The manufacturers of these devices promote UVV as an added tool for IAQ control, saying that UVV attacks microorganisms, chemicals, and odors. While this may be true, it is important to understand that UVV (unlike UVC) will also “attack” occupants in treated spaces by adversely affecting human lungs!

The reason for this is that the shorter (185 nanometers) wavelength of UVV light actually generates ozone. This occurs because UVV light reacts with oxygen to break it into atomic oxygen, a highly unstable atom that combines with oxygen to form O3 (ozone). The American Lung Association states that “exposure to ozone causes a variety of adverse health effects, even at levels below the current standard.” (http://www.lung.org/our-initiatives/healthy-air/outdoor/air-pollution/ozone.html) And the Environmental Protection Agency (E.P.A.) says: “In order for ozone to be effective as a germicide, it must be present in a concentration far greater than that which can be safely tolerated by man and animals.” (https://www.epa.gov/indoor-air-quality-iaq/ozone-generators-are-sold-air-cleaners#generators-effective). The longer (253.7 nanometers) wavelength of UVC light, by contrast, provides highly effective air and surface disinfection without producing any harmful ozone.

The materials and methods of UVC lamp construction determine whether a given UVC device will produce both UVC and UVV light or only the safer UVC wavelength.

I then read up on the leader in this technology: Steril-Aire

Steril-Aire’s UVC devices do not produce any UVV.

It’s not just dirt – it’s biological. What is HVAC biofilm?

Some people call it dirt. Some call it mud, slime or sludge. This gluey matrix growing on heating, ventilating and air conditioning (HVAC) evaporator coils, drain pans and ducts is, in fact, biofilm. Biofilm is an active, complex microbial matrix of mold and bacteria that adheres to the fins of the coil and protects the organisms from biocides.

The biofilms themselves give off prod­ucts of metabolism known as volatile organic compounds (VOCs) which may range in effects from watery eyes and head­aches, to more severe allergy and asthma responses.

Numerous studies have demonstrated that the HVAC system is a viable amplifier, reservoir and disseminator of pathogenic and opportunistic bacteria, viruses and mold. The list below identifies some of the many microorganisms that have been isolated from evaporator coils, drain pans, ducts, final filters and diffusers.

No matter how good the coil cleaner, sprayer or pressure washer used, the effectiveness of these methods reaches about 1 inch into the coil and the organic and biologically active matter gets packed deeper into the coil fins.

Installed on air effluent side of the condensate cooling coils and the drain pan, Steril-Aire UVC energy destroys surface biofilm and airborne microorganisms before they circulate throughout the HVAC system.

What are the most common biological contaminants found in air handling systems? Numerous studies have demonstrated that the HVAC system is a viable reservoir of pathogenic and opportunistic bacteria and mold. Below is a partial list of microorganisms that have been found on evaporator coils, drain pans and ducts: 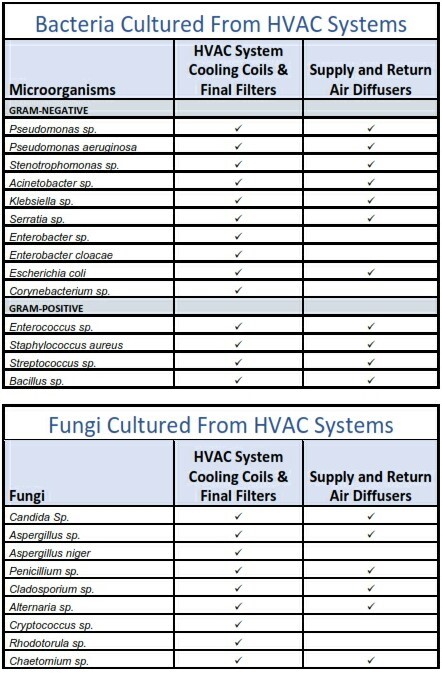 How Does UVC for HVAC® Work? The C wavelength of the UV spectrum targets the DNA of microorganisms, destroying their cells and making replication impossible. Directed at a cooling coil or drain pan, UVC energy destroys surface biofilm, a gluey matrix of microorganisms (bacteria, fungi, debris, et al.) that grows in the presence of moisture. Biofilm is prevalent in HVAC systems and leads to a host of indoor air quality (IAQ) and HVAC operational problems that are sometimes mistakenly attributed solely to mold. UVC also destroys airborne viruses and bacteria that circulate through an HVAC system. 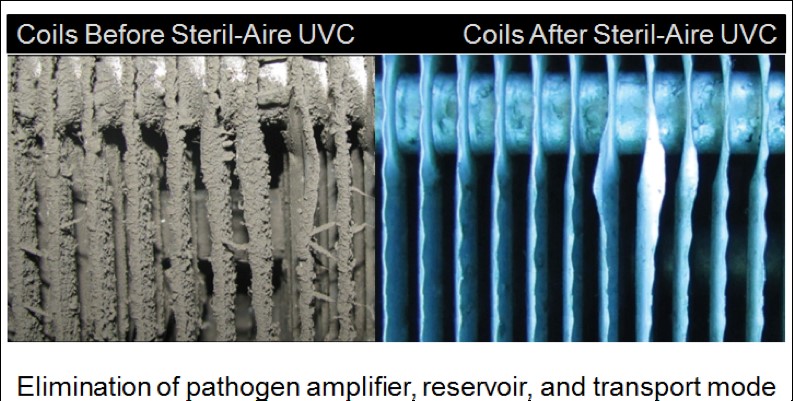 How do you know when to change the UVC Emitters?
For large or critical applications, change out should be performed after about 9,000 hours or 12 months.

How do you dispose of the used UVC Emitters?
Dispose of them as you would any fluorescent tubes, in compliance with your country, local or state codes.

What is the warranty?
The UVC Emitters are warranted for 1 year (9,000 hours).